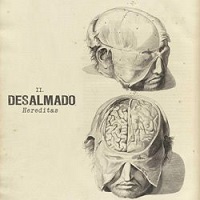 Get in and get out. Not a very difficult concept and Desalmado have it down pat on their Hereditas EP. The precursor to the band’s full-length (which is being produced by current Sepultura drummer Jean Dolabella), Hereditas is a pummeling affair of Napalm Death-happy riffs and a grind tenacity that is utterly ferocious. And it’s only six songs

These Brazillians know how to make effective use of a mosh riff, as heard on opener “Condenados Pelo Ódio,” where an absolutely crushing riff at the midway portion is surely the cause for many pits parting (and starting) in the live arena. It appears that a lot of political barbs are being tossed here (we can’t understand what singer

Caio Augusttus is saying), but that’s no matter when the punkified head-of-steam on “Chagas Abertas” and the title track start to break things down.

A band worthy enough to go toe-to-toe with Wormrot and Rotten Sound, Desalmado display enormous amounts of promise (and terror and pain and destruction and anger, etc., etc.) on Hereditas. Without a doubt a grind band to be on the watch for.