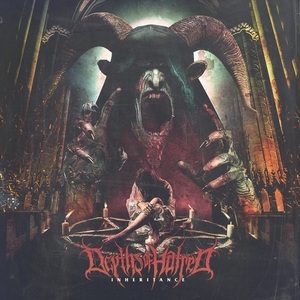 Depths of Hatred has had a good thing going for them over the course of two full-lengths and an EP, the last of which was released in 2018 [Bloodguilt]. Modern death metal (with a dabbling of core) was the basis of it all, and it went straight for the throat. In getting a new vocalist in 2020 with William Arseneau, they wanted to bring the music in a more diverse direction. Inheritance does exactly that, while keeping the feral intensity of their previous releases intact.

Inheritance feels like a breath of fresh air among the more extreme acts currently, while giving off some familiar vibes at the same time. With the added melodic arsenal – something that extremists may cry foul about – it brings with it a new dimension to the band, much in the same way as more recent Fit for an Autopsy or Viscera releases. Instead of just being brutal and heavy, the contrast with melodies makes for a striking combination. There’s all of the explosive death metal that one could hope for, as opener “Enslaved Through Lineage” rolls out the carpet with. But alongside the punishing riffs and blastbeats, there’s some time spent on the atmospheric end too, with some melancholic elements bubbling to the surface in the second half of the track, along with a few clean vocals atop some menacing growls. “Sadistic Trials” lets the melodies really hit the ground running, with an excellent salvo of blastbeats quickly turning into some sorrow-filled vocals and more prominent melodic touches as the track continues. It doesn’t lose much momentum in switching over either, simply providing some additional ebb and flow, making those heavy parts really gain momentum. The same could be said for much of the album, as it makes some excellent change ups between emotive melodies and eruptive energy. It’s really that combination that gives Depths of Hatred such leverage from beginning to end.

This melodic edge penetrating extreme music is one that brings a lot of potential if properly utilized. Depths of Hatred provides one of the strongest examples of this particular outlet, bridging frenetic death metal riffing with melancholic and catchy flair and merging it together into something that’s both destructive and expressive. A huge sonic leap for the band, and an impressive release for those seeking a bit more depth to their brutality. Inheritance succeeds on all fronts. 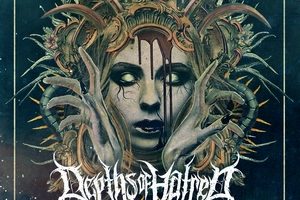