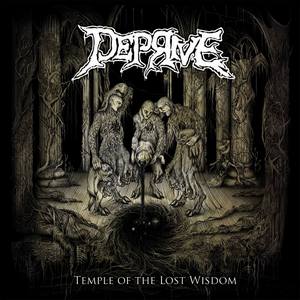 Taking the old school death metal route today usually means that you won’t find much in the realms of individual identity. The sound has been revitalized and overplayed. So if you are going to do it and make a name for yourself, it takes a direction or two that veer you away from the rest of the crowd. Deprive has found exactly this path with Temple of the Lost Wisdom.

Deprive’s route to death metal lies in its melancholy. There’s moments of unbridled aggression such as “Vortex of Repulsion,” which takes an old school flair (more akin to early Amorphis or Hypocrisy) for the first half of the song, but then it drops a doom bomb in the center. The type of sadness and sorrow that bands like Celestial Season and My Dying Bride bring to the table. Emotive and drowning, but it works as an enhancement to the more pummeling death metal format that Deprive returns to before the track’s end. “Gospel of the Black Sun” and “A Desperate Praise” follow a similar direction, “Doomed Tears of Humanity” and “A Mournful Prophecy” take the opposing viewpoint, with doom metal sprinkled with death, but it’s these change-ups that spice things up as you make your way through. It should also be mentioned that Deprived is a one-man act, Erun Dagoth, who clearly has a good ear for being able to mix these two halves of the band’s sound together without it sounding forced or awkward.

Successfully merging an older death metal feel with some genuine doom should make Deprive a name that like-minded folks should be looking into. Emotive death metal with enough heaviness that it should satisfy the body as well as the mind.