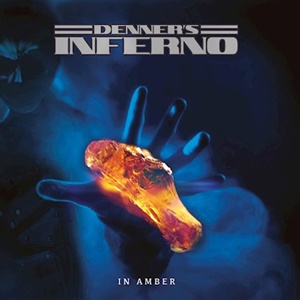 There’s no question when it comes to early guitar influencers from the 1980’s, especially in the classic/epic/traditional mold, most are familiar with the work of Michael Denner. His playing/ songwriting in Mercyful Fate and King Diamond on such important albums as Melissa, Don’t Break the Oath, Fatal Portrait, and Abigail integral to musicians shaping their ideals on the genre. Denner’s Inferno continues to showcase his melodic and sinister guitar play, changing names from the previous Trickbag and developing a debut full-length for In Amber that delves into doom metal, Mercyful Fate-like charm, and even a bit of retro rock.

Assembling three other musicians with impressive credentials and abilities (drummer Bjarne T Holm played with Mercyful Fate in the 90’s among others), it’s evident from the first track to last that Denner’s Inferno concentrate on delivering the goods so to speak – sticking to traditional aspects and building things out for dramatic effect and maximum headbanging, devil horns approval. Michael’s organic nature and tasteful riffing plus lead break embellishment has its roots in the blues and 70’s-inspired players like Ritchie Blackmore, Tony Iommi, and Michael Schenker. It’s easy to hear within the slower progressions, spider web harmony layers, to heavier, majestic chord combinations on “Up and On” that he’s still a master at his craft, opening up the soaring, multi-octave register of vocalist Chandler Mogel – an American cut from the Riot/Rainbow mold for comparison’s sake. At other times hard rock with boogie inflections gives the record dynamic balance – “Taxman (Mr. Thief)” a sultry effort featuring stately organ support, while “Pearls on a String” stirs in a bit of early progressive Rush measures that allow Chandler to float in a cloud-like ambiance with his melodies. The recording/ production measures appear to subscribe to that same on the floor, relatively naked approach – enhancing the musician output and putting these songs in the best light without any extraneous studio tricks.

If you’ve always admired Michael Denner, and you love the sounds of acts like UFO, Rush, Candlemass, and others in that 70’s retro-rock meets metal line of artists, In Amber will appease your tastes and provide endless hours of ripping entertainment.