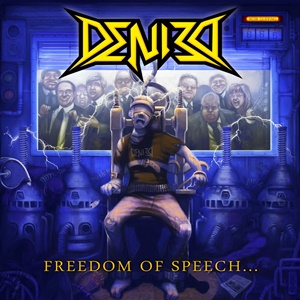 Starting in 2004 through guitarist Andreas Carlsson, Swedish heavy metal band Denied has released a couple of demos plus a debut album Let Them Burn over their decade plus existence – setting the stage for the second full-length Freedom of Speech. Currently a four-piece in the main, the album contains vocal support from Johan Fahlberg (Jaded Heart) and one track each by Chris Laney (Pretty Maids) and Andreas himself, rounding out a solid ten-track effort (eleven with a bonus cover song). After a few spins it’s obvious these musicians possess the requisite abilities and songwriting skills to achieve appeal across numerous heavy/melodic/power platforms.

Much of the material builds off sharp, focused riffing and the soaring melodies that sprout up as a result – while the steady rhythm section work and subsequent lead breaks add the proper tasty elements to an already attractive aural meal so to speak. It’s hard not to imagine massive head banging or fist waving to the hooks for “Don’t You Know Me” or the lurching, heaviness within “Three Degrees of Evil” – in a class of Priest-oriented offshoots like Primal Fear or Mystic Prophecy. When Denied choose to get more aggressive or faster/crunchier as in “The Ferryman”, it makes sense to have Andreas deliver the vocals as his melodies are more in tune to the speedy, acrobatic action that takes shape as the twin guitar harmonies fly about from Chris Vowden and the aforementioned Andreas – the half-time tempo transition adding an exotic/cultural nuance to the mix. Johan as a singer handles the versatility with class, respect and that magnificence that upper tier singers possess – bluesy and rearing back for the heavens on “Scarred Soul” as a personal album favorite. And kudos to the group for breaking out “Stay Hungry” from Twisted Sister for the bonus cut – while most know the big commercial hits from said album, this has always been an energetic song that proves their legacy and Denied give it the proper forum, paying the homage it deserves with strong, harmonic guitar support and thicker, metal aesthetics.

Straddling that melodic metal / heavy with power template, Freedom of Speech delivers anthems for a current generation while paying respect to the elders – making for an entertaining good time all around. 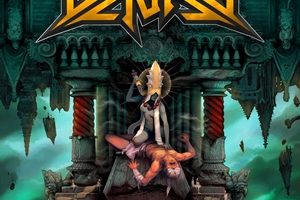