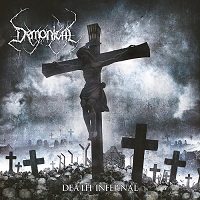 With Entombed taking their good ‘ole time in between releases and Dismember regaining their bearings, the void of straight-Stockholm death metal is being filled by the likes of Diabolical, Impious, and the band in question, Demonical. While these trios (and surely a disparate few that we haven’t mentioned) are doing an admirable of job of playing it by the book, there’s nothing quite like the oldies. Still, Death Infernal rattles and hums with a Dismember-like precision, meaning they’re sloppy, and a Hypocrisy-esque penchant for atmosphere and groove, meaning the album is more than just that infamous jagged guitar tone. Suits us fine.

Opening with “The Arrival of Armageddon,” Demonical effectively lays out their plans from the get-go, with a big, burly DM riff leading the way. It’s a common tactic in this realm to open things up with a speedy number, something that usually works given how easy it is to throw down with the grizzled Swedish guitar tone. From there, the band has the brains to toss in some mid-tempo stompers such as “Ravenous” and “Through Hellfire,” two songs that sandwich “March For Victory,” which is perhaps the album’s most melodic track. Actually,it is the album’s most melody-happy number, thus emerging as the clear-cut standout based on its prevailing power metal vibe. Power metal + Swedish death metal usually nets killer results.

The band is very much the sum of its influences, something makes Death Infernal a bit too familiar for one’s liking. Then again, there’s only so much one can finangle with the Swedish death metal sound – you’re either brauny and reliant on the Metal Zone pedal, or suave and melodic like the fine folks in Gothenburg. Splitting the difference has proved to be quite the task and Demonical don’t appear to be in much of a hurry to figure out. Who can blame them?