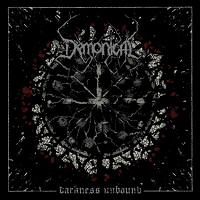 Sometimes you just want to get something that works – Mr. Right Now, as she says.  Well if what you are lusting after is a new slab of good Swedish death metal, perhaps Demonical’s forthcoming album Darkness Unbound will help get your rocks off.  Certainly flying in the face of the current trend in death metal to try to recreate the olden days of the genre with lo-fi, stripped down ugliness, Demonical create crisp, burly, modern and well executed tunes.  Don’t let the brief opening title track fool you, this is not some darkwave album, this is straight-up Swedish death metal, no tricks, no twists.

Demonical head right into things on Darkness Unbound with “The Order.”  Now, at first (and maybe at last, too) Demonical could sound like other bands of the genre, and to be honest maybe it’s true, but I don’t think that’s the point at all.  No, this just works hard.  And sometimes, it becomes an outright head-banger that no metalhead would be able to resist.  Where Demonical might lack in uniqueness, they make up for in musicianship. Darkness Unbound features adept guitar work, from both the lead and rhythm guitars. Another of the strengths of the album is the way it moves.  The rhythms are varied but tight, and the songs are concise and to-the-point, averaging a little over three minutes each.  There is a good pace to this release which doesn’t allow the album to linger or overstay and keeps things enjoyable and intense.

As with any good “classic” Swedish death metal, there is an element of melody to the sound.  It doesn’t compare to the overtly melody-heavy Swedish bands like In Flames or Soilwork, as its use is more subtle, and the overall sound is certainly more brutal than the aforementioned bands.  The tone is decisively muscular, and vocalist Sverker Widgren growls with brute force.  Ain’t no clean singing here.

Darkness Unbound is a good and worthwhile effort, though not likely to top many lists this year, it has plenty to offer and gets a definite thumbs up. Highlights include “Hellfire Empire” and “Deathcrown”