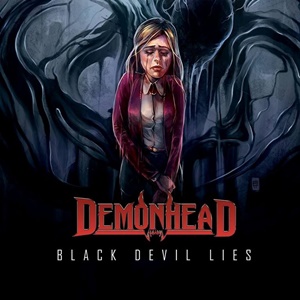 Forming in 2007 and heavily punk/metal crossover influenced at the start, Australian act Demonhead have transformed in their twelve-year history into more of a thrash/traditional metal montage with melodic/stoner hard rock nuances. Natural lineup changes, health scares (emergency surgery saving guitarist Rue Power’s life), and style shifts allowed the band to evolve into its current four-piece incarnation for their second full-length Black Devil Lies. It’s been four years since the Bring on the Doom effort, the band releasing a couple of singles during 2017-18 to appease the patient patrons waiting on this follow-up – but the end results are quite strong for those that love catchy, anthem-oriented heavy metal.

Recording with Chris Themelco (Orpheus Omega) ensures Demonhead need not worry about receiving less than a punchy production – the guitars, bass, drums, and vocals vibrant, penetrating your speakers with this lean meanness that should rattle the rafters. As guitarists Dave Lowes and Rue lay down a crunchy foundation and build upon it with entertaining transitions and lead breaks – often injecting wah-wah accents for lead bursts in the title track, or mesmerizing build-ups/harmonization lifts during “Betrayal Avenged” that rival Vicious Rumors and Judas Priest. Their love of stoner hard rock/metal comes up in mid-tempo efforts like “The Ritual” or the semi-swinging “Blood Debt”, the latter allowing Dave as a vocalist to use his sinister mid-range to hypnotize the landscape during the verses as the gang background ‘hey’ chants build up the anticipation for his words. As commercial as some of the hooks can be, the band are alert to push some heavy passages down the pike – “Double Cross the Dead” razor sharp with its vicious guitar/drum interplay against a sing-a-long oriented chorus, while closer “Face Your Demons” has some interesting choppy/semi-progressive musical moments as the tribal double kick accents start the song before returning to a melodic metal effort with killer triplet parts and back and forth gang to main vocal support.

Ten songs in just over 40 minutes, Black Devil Lies has a lot of appeal for the 80’s/90’s metalhead who enjoys Iron Maiden, Black Sabbath, early Metallica/Megadeth, but also didn’t mind the energy of say 3 Inches of Blood in the mix. The right mix of melody, hooks, and powerhouse riffs makes Demonhead another important band to keep tabs on from Australia.