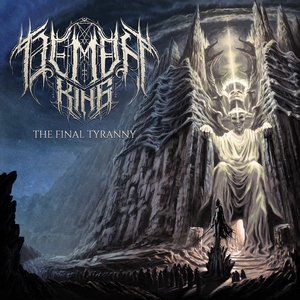 Bound to be a noticeable first effort due to the members involved, and for good reason, as this marks the return of ex-Enfold Darkness guitarist Matt Brown to the extreme scene. Not to mention that he has brought Inferi’s Malcolm Pugh (playing on bass) and ex-Inferi member Jack Blackburn in on drums to round the band out. As you can probably guess, this one is going to play at extreme speeds.

Thought it might be an unfair comparison, it sometimes feels like a more blackened version of Inferi due to the combination of frantic speed and technical melodies. The pace is furious and there’s volley after volley of blastbeats to drive that tempo home further, but it works. No doubt due to the level of musicianship across the board in this act, but even at the fastest tempos there’s still something remarkably listenable about the whole thing. Then when they do ease off the tempo for a bit, there’s some even more impressive melodic guitarwork going on and the blackened aspect feels stronger. You don’t have to go long to hear this either, as opener “Tyrannical Reign of the Deceiver” graciously relents a bit in its second half to bring out those glorious sounding melodic fireworks. The other three tracks follow suit here just as elegantly. Each providing a nice balance between exhilarating speed and complex melodies and more epic-sounding slowdowns where some synths creep out along with the more melodic guitarwork. The mix is quite solid too, with an effectively audible bass (see “Invoking the Spirit of Chaos”) to give the quick riffing some added heft.

A promising new act comprised of some exceptional players within the scene, Demon King has all of the potential to make some waves in the tech scene. The Final Tyranny works well as an introduction to what the band is all about, and what they are capable of. Perfect for those seeking raging tempos and epic blackened melodies.