Delain – We Are the Others (Sensory Records) 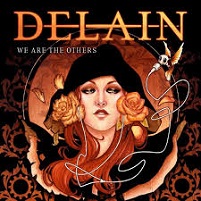 While many groups quake at the pressure of releasing a third album, the Dutch symphonic metal five-piece Delain seem to thrive at the prospect of proving to fans that they will be a force to reckon with atop the scene. Their lineup features ex-Within Temptation keyboardist Martijn Westerholt and a friendly female vocalist in Charlotte Wessels, and they pull out every bell and whistle imaginable on We Are the Others, 12-song effort (16 on the digipack with 4 live cuts).

At times injecting a little bit of the down-tuned, thick modern guitar groove in songs like “Milk and Honey” or the staccato shifting “Babylon,” there are other times where Wessels’ pop soaring sensibilities kick into high gear, with “Are You Done With Me” being the most obvious, commercial example. Lyrically Delain tackle relevant, social subject matter such as the brutal British hate crime of a couple beaten comatose by a youth gang over their gothic looks on the title track, beyond the tales of love and self-reflection to showcase a mind meld between the physical musical output with emotional words.

Elsewhere, guitarist Timo Somers lays down some serious licks in that heavier Evergrey manner on the captivating opener “Mother Machine,” proving though Delain may be based in the symphonic realm, that axe skills play as important a role as the melodies, theatrical set up and ivory tinkles. The exotic, Middle Eastern slant comes out on “Where Is the Blood,” which features Fear Factory’s Burton C. Bell providing a fierce, dark male contrast to Wessels’s higher crest delivery.

Given their chance to make an impact at a previous Progpower appearance in 2010, I think North America is ready for more touring from Delain, and they’ll be happy to hear a healthy selection from We Are the Others. Addictive songwriting with the right balance of catchiness, Delain could out maneuver Within Temptation based on this output.