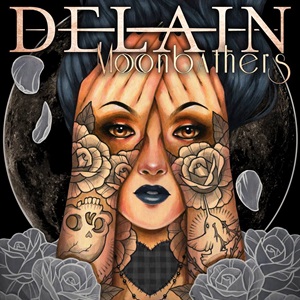 Prosperous times for Dutch symphonic metal meets gothic rock band Delain these days. Originally beginning as a studio project a decade ago, they’ve transformed into a viable, active touring entity – regularly recording and pushing themselves up on prime tours in North America alone with Kamelot, Sonata Arctica and Nightwish. Pressure to appease the growing legions on this fifth studio album Moonbathers could make some musicians crumble – fortunately for this sextet, this record ambitiously illustrates the open platform this genre offers and if willing to explore all facets of dynamics involved, rewards generously as a fully satisfying aural experience.

Out of the 11 songs, two were already heard on last year’s Lunar Prelude offering (“Suckerpunch” a particular catchy highlight), so delving into the other nine selections there’s a distinct swing in feel where certain members step up to add different nuances to the proceedings. Especially evident is the heavier guitar tone for Timo Somers, giving an energetic, almost Evergrey-ish power to the adventurous opener “Hands of Gold” plus mid-tempo anthem crusher “Fire With Fire” to prove that there’s still a metal side to this unit. Keyboardist Martijn Westerholt layers his parts beautifully, knowing when to be spacious as well as alluring during a more dramatic, emotional number such as “The Hurricane”- elevating Charlotte’s charming and exemplary vocal range that has placed the band at the top of their game. Occasional growls appear in the aforementioned “Hand of Gold” (from guest appearance Alissa White-Gluz of Arch Enemy) and “Pendulum”, never deterring from the main hooks but proving that Delain isn’t content to soften their sound as the years roll on.

“Scandal” is a cover from Queen – bold in choice indeed, because this iconic UK rock band possessed one of the best singers in history with Freddie Mercury. And yet, the theatrical nature of the song fits Delain well, the larger than life vocal harmonies for Charlotte befitting this classic 80’s vibe, which along with the killer, emotional lead work and talk box keyboards makes it a fitting tribute and their own at the same time. Add in the grey colors and tattoo-oriented illustration on the cover that promotes a thousand-word (or more) outlook – and should be a great merch sell – and you have the makings of an act confident and hitting their stride creatively on all fronts.

Closing in on their 10th anniversary, Delain proves through Moonbathers they are ready for permanent headlining status globally.