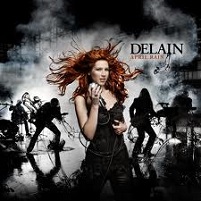 Quite the fuss around these Dutchmen (and woman), primarily because of Martjin Westerholt’s (ex Within Temptation) involvement and the fact singer

Charlotte Wessels is another in a now very long line of beaming sirens to front a simarily-styled (read: Nightwish) metal band. April Rain does have some merit, though, as Westerholt flexes some serious songwriting muscle and Wessels turns in a admirable, if not rousing performance. How this will fall into the symphonic metal fray remains to be seen.

here. Buoyed by a sunshine-y (really, yes) verse and muscular guitars, “April Rain” is the type of single that always sucks people into symphonic metal; it’s almost too stickly-sweet to resist. “Invidia” follows suit, but since both of these jams are placed at the front of the album, there’s lots of time to be worn down and inevitably, it does happen.

When Delain stays within the more guitar/keyboard driven side of things, it all comes dangerously too close to Nightwish and ahem, early Within Temptation territory. Such is the case for “Stay Forever,” “Control the Storm” (Nightwish’s Marco Hieltala sings

the chorus on this one) and “Go Away,” all of which fail to stir up any muster. It’s not that these songs are bad, they’re just a bit too familiar.

April Rain is one of those albums that would be better off to stay poppy. The title track is killer, so is “On the Other Side

” and “Virtue and Vice,” all of which are bouncy, mildly saccharine numbers. For now, it appears Delain is enduring some very minor growing pains…nothing which a little chart success can’t iron out.