Delain – A Decade of Delain: Live at Paradiso (Napalm) 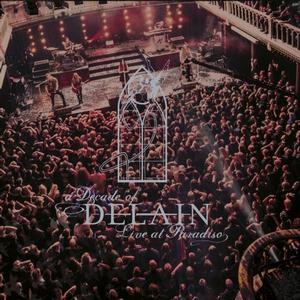 One could make the claim that live albums are more of a thing of the past. With all of the accessibility of recording equipment and cell phone use, it’s easy to go onto YouTube and find some footage of one’s favorite band. Then there’s the idea that a band’s live energy doesn’t always translate well into watching or listening somewhere else, removed from the feeling of being in the moment. In other words, it’s an uphill battle to release a worthy live album, and it takes a truly special band to get it right.

Celebrating their tenth anniversary, Delain set up this special evening at Amsterdam’s Paradiso to include a plethora of guests (some of which included Burton C. Bell, Alissa White-Gluz, and Liv Kristine) and a setlist that spans their entire discography. The setlist itself does a nice job of pairing up live favorites (such as “We Are the Others,” “Army of Dolls,” “Sleepwalkers Dream,” and “Get the Devil Out of Me”), new cuts from their latest album, Moonbathers, and some rare treats (“Where is the Blood” and “Your Body is a Battleground”). The sound is fantastic, allowing some cuts to sound even better than their studio counterparts. Gauging solely on the musical portion, it’s worth an investigation for long-time fans.

But the real treat is the video. Delain are strong performers in the live setting, and Live at Paradiso is just about the best thing available other than actually going to see the band play. The cuts frequently dip into viewing the sold out crowd getting into each track and engaging with the band, be it clapping/singing/jumping along. It aids in having the video feel like you are a part of it. And of course, the interactions between the band members are what put Delain above many in the genre. Completely into what they are doing, with smiles all around, the band gives a commanding and charismatic performance. The video helps with this by cutting across to all members, in a variety of angles (yet not in a jarring way). The energy is infectious, even if you are simply watching it on a screen almost one year later.

In addition to the concert itself, it also comes with a documentary (We Are the Others – A Decade of Delain), a live version of “We Are the Others” from Masters of Rock 2015 and the video for “Suckerpunch.” It’s clear that a lot of love was put into the making of this release, and it perfectly captures the essence of the band. Delain has shared a special evening that showcases their energy, charisma, and class – a reason they’ve been a rising force that have been championed within the scene. Here’s to the next decade.