Deiphago – In the Eye of Satan (Hells Headbangers) 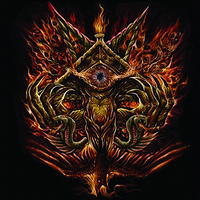 Caustic, filthy, and noisy. The three words that first come to mind when engaging in Deiphago’s fourth offering, In the Eye of Satan. Not that anyone would expect otherwise from these Costa Rican black/death maestros. For those that haven’t, expect musical armageddon (albeit a hazy one).

After a seemingly obligatory introduction, Deiphago wastes no time in grabbing the listener’s throat. It takes mere seconds before the music barrels headlong into bestial blast beats, psychotic vocal shouts, and dizzying guitar riffs. The minimal production gives it even more of a push in this direction. It’s this jump in intensity that kick-starts the band and they never really stop until the final moments of the title track. Not to say that the album is a complete blur by any means though. The afore-mentioned title track starts off with some ominous rolling basswork, “(6x6x6)/3” (certainly in the running for most odd song title of the year – the answer is 72 by the way) has some riffage sure to erupt a monstrous circle pit, and “Serpentine Anti-world” has some interesting melodies and atmospheres.

The problem ultimately lies with the sustained blasting and riffing. It whirls up into total chaos and occasionally sounds a bit sloppy even. The drumming at times does not seem at pace with the guitars. It might be chaos incarnate, but it doesn’t mean it can’t be a bit more organized. In the end, some of this is forgiven due to the utter craziness that envelops the experience. If you are looking for something to invoke the dark lord and send your neighbors running to the hills, In the Eye of Satan will probably serve you just fine.