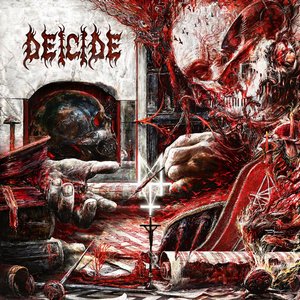 One of the biggest of the death metal veterans, Deicide is one that doesn’t require much introduction or fanfare. Much like fellow juggernauts like Cannibal Corpse or Obituary, you also know what you are going to get with a new release. With an accomplished career, it’s all but certain that they are going to continue a winning formula. While some previous releases may not have reached the high standards of their first few albums, it’s quite clear that Overtures of Blasphemy is downright feral in tone.

An intense and brutal listen, the majority of the cuts on Overtures of Blasphemy waste no time in accumulating blast beats and high velocity riffing (from the Kevin Quirion and Mark English team). Of course, Glen Benton’s growls have long helped to define the band, and he’s just as demonic sounding as normal, with in-your-face lows that still manage to stay away from covering up the riffs (with yes, the same lyrical content that has accompanied the band since day one). Some melodies also inject their way into the mix, with songs like “Anointed in Blood” and “Defying the Sacred” keeping the album from sounding too much like a speed burst. But still, expect razor-sharp blasts of songs, with songs mostly hovering between the 2:30 to 3:30 mark (an overall 37-minute release) allowing them to commit some serious bludgeoning and get out while the energy is still oozing from the speakers.

It’s good to see that Deicide is still just as genuinely pissed off as they were in their younger days. Some may say that it pulls directly from the first few releases in that sense, but let’s face it – there’s only one Deicide and this is what they excel at. It’s been a while since they’ve felt this enraged and venomous, and Overtures of Blasphemy is definitely their strongest release in quite some time. An album that doesn’t evolve the formula so much as put everything into a pristine, pummeling form.