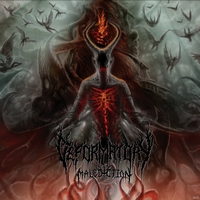 Canadian technical death metal doesn’t exactly scream innovation here in 2016. However, it does mean that it’s probably going to be a wild ride, full of crazy musicianship and brutal performances. That’s the promise that Malediction brings to the table, and it does succeed in that right. But it just seems so familiar that it’s hard to make room for itself.

Things start out in vicious fashion, with an intro snippet departing quickly and launching into Origin-esque speeds that will take your breath away. Deformatory chose wisely with this initial track, setting the stage for what to expect in later rounds. Blazing speed bursts, thick and chunky riffs that hit their hardest at the mid-tempo range, and very upfront and brutal vocals. There is some intricate musicianship going on, particularly when they decide to go full speed ahead, and it’s one of the strongest aspects of the disc. It’s spiraling and twisted madness that borders on relentless and wicked intensity, as you can hear for yourself in “Apotheosis.” When things slow down, there’s more of an emphasis on sheer brutality on the riff end, but it does effectively balance things and keep the faster and more technically driven aspects from becoming too much.

Despite the clever technicality and speed injections, the overbearing familiarity keeps the album from feeling like its best. While it’s playing, it’s compelling stuff but nothing stands out to make it necessary to return to. The vocals feel like they are a bit too high in the mix as well. It’s one thing to make them sound intense (which they certainly do here), but it almost feels like they are taking away from the guitars at times. Deformatory have the technical chops down pat, it’s just a matter of bringing their material in more of a unique direction.