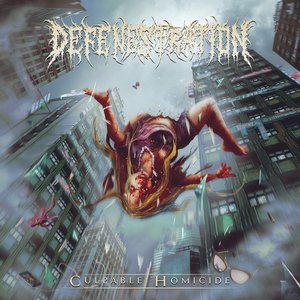 Lots of extreme metal bands open up an album with a movie sample. Many dip into classic horror and science fiction. But how many bands do you know of that have opened with a clip from Dumb & Dumber? Interesting tactic, and it does actually fit the music. That said, the rest of what Defenestration is offering tends to be more or less up the usual alleys of extremity.

Offering modern angles on the slam/brutal/deathcore avenue, one thing Defenestration has going for them is that they don’t rely on pushing hyperspeed all over the place to get your attention. Instead, there’s a lot of focus on riffing and groovy bits. “Involuntary Manslaughter” is a good reference point, that while they can turn up some speed, much of the song sits in groovier, lurching territory. That’s unfortunately where the biggest hang up lies as well. The riffs just aren’t as exciting as they should be. Plenty of bands revel in groove, but the grooves have to catch. All too often that’s just not the case here, with some songs like “Splattered” being entirely forgettable. What makes it more disappointing, is that the band does really click on a few tracks, like the more urgent “Slam Jam” and brutal goodness of “A Long Way Down.” There’s two cover songs here, with a by the books copy of Dying Fetus’ “Kill Your Mom, Rape Your Dog” and a slamtastic cover of Linkin Park’s “No More Sorrow.” The latter is a bit ridiculous, but it’s nice to see them take the track in a rather brutal direction.

There’s some shades of promise amid Culpable Homicide. But the tracks are essentially hit or miss, making this one more of a ‘great EP hidden inside an okay full-length.’ With more riff-consistency, Defenestration could make something of themselves.