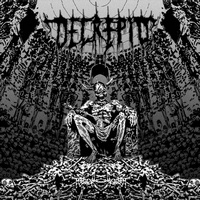 UK death metal just doesn’t seem to have that same “ring” to it when you talk about other scenes like Stockholm, US, or even Dutch. When you picture those places, you have a tendency to identify quickly with uncompromising death metal that offers to crush the listener with brutality. Perhaps that’s why Decrepid bring elements of two out of those three locales on their second album, Osseous Empire.

Those hoping for more Stockholm death metal need not apply here, but those fans of early ‘90s US death metal, as well as some of the Dutch variety should identify quickly with Decrepid. Some quick comparisons could point to Sinister, Monstrosity, and Deicide for points of reference. Decrepid keeps the uncompromising intensity of that early to mid ‘90s death metal alive and well (without having to resort to the HM-2 pedal no less) for better or worse. The vocals are righteously guttural (and occasionally raspy), the riffs have that mid-tempo mode down pat with some interesting leads (see “Into the Doom”), and even the production gives it a more raw appeal. It’s the type of thing that you could disguise among the other albums of your collection and no one would notice that it came out in 2015.

Effective in a retro state of mind, Osseous Empire does have its merits in regards to its goals. This particular time period in death metal frequently gets overlooked by those wanting to ape the Swedish scene or Death’s early legacy. Good to see some newer bands paying their respects to a different time.