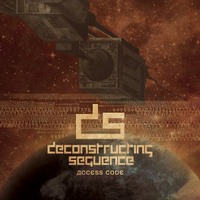 The future, and its infinite prospects (or lack thereof) has been regular fodder in metal for quite some time. Generally, futuristic metal is linked solely with cyber-industrial metal, aka Fear Factory, Strapping Young Lad, and their not-as-successful minions, but leave it to a trio of Brits to put a fresh spin on the idea. Formed in 2013, Deconstructing Sequence came together under the somewhat pretentious banner of “extreme progressive art,” which not only doesn’t pigeonhole the band, it also suggests they are suitably capable on their instruments. Based on the two-song Access Code EP, they are.

Boasting prime influences such as Akercocke, Emperor, Aborym, and Arcturus (yes to all four!), Deconstructing Sequence go down in a maelstrom of frenetic, high-wire guitar action, a lot of which doesn’t follow a straight path, like on “We Have the Access Code,” a song that sounds like it was programmed by a bunch of robots. For that matter, the song’s ominous glow and industrial rattle are welcome, providing an ample cinematic scope. The more adventurous (if that’s possible) “A More Habitable World is Found” gets wrapped up in again, some seriously warped and creative guitar riffing, a lot of which are utterly technical and off-time. Love the voice-overs, too.

Because Deconstructing Sequence write such difficult and over-the-top songs, they could blow themselves out over the duration of a proper full-length. As in, even after several juggles between the two songs on Access Code, DR needed to turn his brain off for a quick rest. If this is how metal will be played in the future, then we’re all going to have ADD.