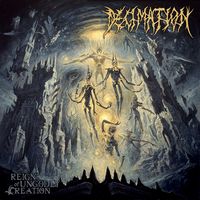 With the power of the Internet and all of our high powered means of communication, we’ve sort of grown accustom to the quantity over quality debate. The death metal genre is flooded by bands hoping to make their impact on the scene. What separates the good from the bad then? It’s all about rising above one’s influences and trying to find some distinguishing characteristic(s).

When listening to Reign of Ungodly Creation, there is unfortunately no true distinguishing mark of their own. It seemingly places all of the right pieces into motion, yet there’s little to differentiate them from countless others. There’s some killer Dan Seagrave artwork, a nice blend of technical ability with bludgeoning riffage, and downright brutal vocals. Yet the only real intriguing fact is that the majority of the song titles seem more like eloquent sentences (“Supreme Wisdom of Blasphemy in the Reign of Ungodly Creation” or “Prophetic Despise Under the Pendulum of a Sacrilegious Throne” for example). The band’s sound can mostly be summed up by noting the trifecta of Suffocation, Deeds of Flesh, and Nile. On the plus side, the production and guitars in particular are solid, giving Decimation that thick and meaty approach that many bands of this style would kill for.

While it may not have the most inventive take on the genre, the overall sound still can’t be thoroughly faulted. You’ll find yourself bopping your head to the thick grooves and toe tapping to the technical prowess the band possesses. Just don’t expect you’d be able to identify them out of a death metal line-up if you were given a list of names. It entertains, but it’s not exactly brain food.