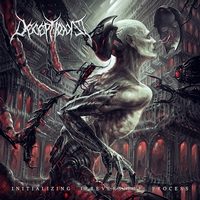 It seems like only yesterday Deceptionist put out their first EP, The Beginning. Technical death metal sure to engage those looking for bands like fellow countrymen Hideous Divinity and Hour of Penance, as well as Spawn of Possession, it had all the hallmarks of a band that was going to move up the ranks. Sure enough, Unique Leader Records picked them up, and Initializing Irreversible Process is the band’s first full-length effort.

Cutting to the chase, this album is made with the lifeblood of technical death metal. Mechanized and frantic material that is destined to drop jaws and make people rub their ears in disbelief. The technical factor is at the same par as more established bands, and Deceptionist take little time to allow you to adjust for this near-relentless speed rush. But for those who dig the adrenaline (and tech-crazed) injection, there’s much to be thankful for. It’s nothing particularly out of the ordinary for the genre, but you can’t knock the precision and technical chops involved. But it also displays some of those genre trappings, occasionally sounding somewhat cold and emotionless. Which is why a few songs offer some potential for the band to truly spread their wings on the next album. The mechanized riffing attack starts to play around with industrial effects in some of the later tracks, most notably the appropriately titled “Industrivolutionaction.” Some excellent syncopation between the two elements feels fresh and really draws in the listener. Perhaps an entire album of this would diminish the purpose, but some more implementation could only further individualize their tech death approach in future recordings.

Initializing Irreversible Process is technical death metal made for fans of the genre. With it may come a few trappings for some, but the level of implementation and musicianship is stellar. Plus the potential to further fuse their sound with the industrial effects should find some appeal with some others as well.