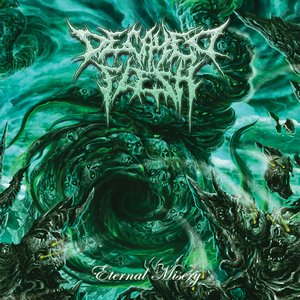 When it comes to the extreme metal underground, Asia and particularly Indonesia, know how to deliver the uber-brutal goods. There’s a wealth of bands that push out some of the most extreme death metal around, particularly in gore/slamming circles. While Decayed Flesh doesn’t go completely over-the-top in that regard, it does an excellent job of polishing up the brutal sound of acts like Suffocation and Deeds of Flesh.

After an effectively mood-setting and reserved opening for over half the run-length of “Into Eternity,” Decayed Flesh jumps out from the shadows and immediately begins to pulverize with riffs. Though some melodic pieces here keep the track approachable and heightens the atmosphere. Some instant recall to Effigy of the Forgotten is noted as the tempos quicken through the instrumental track and it continues further with “Abyss of Misery” as the guttural vocals kick in. Not a bad thing tough, as they have a real grasp on what makes this particular style of brutal death metal kick (and tis their first full-length too and influences are bound to reveal themselves). The pacing is pretty relentless, as is normally the case for the genre, but the band’s ability to switch up the tempos on the drop of a hat (check out “Sclerosis”) keeps things interesting, alongside the militant drumwork. The songs don’t outstay their welcome either, keeping to the 3-4 minute marker and wrecking as much as they can in the timeslot, particularly with slower grooves (see “Omnipotent Hypocrisy”) to shake things up.

Brutal and heavy from beginning to end (sans the mentioned intro), Decayed Flesh revel in the golden days of brutal death metal. It shoots straight and doesn’t get bogged down by too much technicality or melody, it just worries about throttling the listener as much as it can. Which is entirely effective.