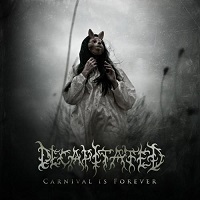 Poland’s extreme deathsters Decapitated have finally returned to the fold after a five year hiatus to deliver their fans (and possibly a legion of new ones) their fifth full-length release. Named Carnival Is Forever, the band’s take on brutal and technical death metal hasn’t varied over the span of their absence, but their songwriting prowess has definitely strengthened.

Sporting a much smoother transition from the blistering chaos to the more streamlined complexities within the music, Carnival Is Forever is clearly the band’s most imaginative and well thought-out release to date. The drumming of Krimh are as compact and controlled as they are ferocious and the stringed assault of Vogg (guitars) and Heinrich (bass) are as abrasive in delivery as they are catchy. Virtually nothing on the album in terms of the music, whether it be their delivery or sound, is sloppy; something that can’t be said from their previous material.

New vocalist Rafal Piotrowski doesn’t disappoint, either, as the shoes he opted to fill, while substantial in size going in, fit him pretty comfortably. He possesses the same sort of vitriol and vigor that The Haunted’s Peter Dolving once had (many moons ago). Though his range isn’t quite as long-reaching as Sauron or Covan, his energy and focus trump them and with some more time he can blossom into one of the best in the biz.

Carnival Is Forever takes the listener on a journey through savagery and brutality as well as a thrashy grooviness not found too much on their previous albums. Also, the band takes more of a Meshuggah-styled approach on certain points of the album, in particular the chilling and disjointed title track, arguably the gem of the bunch, though “Homo Sum” is certainly a standout track.

The only real downside of the album is the rather thin production. There is so much power and fluidity throughout the entire record, but the final mix has certainly taken away from the bite and murderous attack of the guitars. The drums sound a bit too tinny overall as well, which is always a pet peeve of this reviewer. It’s a shame, because the overall gleam and polish that is supposed to make the final cut shimmer actually has made it a touch weaker than it should be. Death metal, whether it’s technical or straightforward, is supposed to attack the listener’s ears and punish him or her; Carnival is Forever doesn’t really do that.

Overall, it’s a splendid listen and the craftsmanship that went into the album us superb. Song-wise it’s Decapitated’s best effort; it’s just too bad the production is too clean because this could have been one monster of an album.