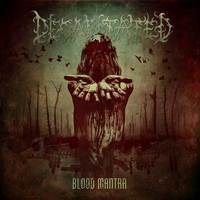 It’s been three years since we’ve gotten wind of any new Decapitated material. Never one to repeat themselves, nor rest on their laurels, each new album from Decapitated adds new elements to the mix while retaining a feel that is unique to the band. Blood Mantra is no different in this regard.

Decapitated’s early material drew from heavy technical ambitions, until switching gears a bit with Organic Hallucinosis. Since then, through tragedy and other member transitions, the band has continued to evolve a more modern, groove-based sound. While something about 2011’s Carnival is Forever never caught the ear, rest assured that 2014 Decapitated is completely back on track. The songs are more diverse than they’ve ever been and Rasta’s vocal performance is stronger and more powerful than his first go-round. The first two tracks are about as death metal as they come, with “The Blasphemous Psalm to the Dummy God Creation” being one of the best face-melters of the year. “Veins” and the title track follow suit with some of the thickest, meatiest riffs that you are likely to hear. Both songs are absolute neck-breakers seemingly designed for demolishing the live audience. “Nest” sees the band shifting more towards Meshuggah territory with the riffing structure and displays a bit more melody from the usually destructive band. But nothing compares to the lengthy “Blindness” as far as melodies go. There’s much more breathing room and a weightless vibe that is emitted, with some hypnotic riffing that gradually builds and dissipates, giving the ambient closer “Red Sun” some time to put you back into a more restful state before you inevitably hit play once more.

While there is certainly a portion of the death metal crowd that longs for the return of the more “techy” Decapitated, Blood Mantra sees the band staying true to form and pushing their sound a bit further. There is no denying the bountiful groove on this album, and it’s frighteningly infectious. Catchy and without losing their signature heaviness, Decapitated have hit this one out of the park.