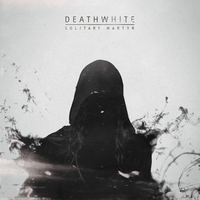 Firing back one year after their first EP, Ethereal, Deathwhite returns with the follow-up Solitary Martyr. While Ethereal showed plenty of promise, there was a huge barrier in the way – the strength of the clean vocals. Simply not strong enough to carry the material with range and depth, it was the one chink in the band’s armor. Wouldn’t you know that the vocals on Solitary Martyr have done a complete 180? The result is stunning.

Musically-speaking, Solitary Martyr doesn’t move too much further beyond its predecessor. Dark and gloomy metal fit to sit alongside bands like Katatonia, Paradise Lost, and earlier Anathema (with a bit of post-metal citings as well). There does seem to be an added level of confidence to these tracks that wasn’t present with Ethereal. Perhaps it also comes into play due to the vocals, but the sometimes heavy/light approach feels more swift – leading to more emotive resonance. The guitars have a Tonight’s Decision-esque crunch to them, but don’t think that the riffs themselves veer too far in that direction, with plenty of UK-inspired atmosphere to juxtapose with heavier moments (see “Suffer Abandonment”). The vocals give some added heft to the more ‘near-upbeat’ chorus of “Solitary Martyr,” yet the acoustic/electric approach to “Vein” is really what allows the singer to shine brightest and show the broadest range (though the striking acoustic segments of “Pressure” really give it a run for the money). The lack of growled vocals is notable, and should serve to set the band apart from some like-minded contemporaries.

Amazing what some change-ups with the clean vocals will do for a band. Deathwhite now seem primed and ready to make their mark upon the scene. Solitary Martyr is a total no-brainer for those who like their metal served up with plenty of feeling and sorrow – perfect for a rainy day. Fingers-crossed for a full-length in the near future.