Deathwhite – For a Black Tomorrow (Season of Mist) 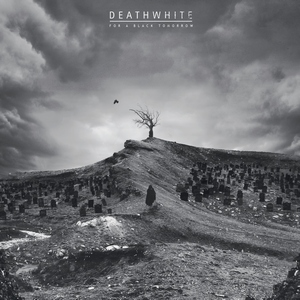 After two EPs, the time has finally come for the mysterious American three-piece of Deathwhite to take the jump into full-length waters. Solitary Martyr saw the band spread their wings sonically, as well as introduced a new vocalist. For a Black Tomorrow takes what worked best in both previous EPs and further enhances their sound and should establish them as an emerging force within the scene.

While not as much of a jump as the incorporation of a new vocalist in the previous EP, For a Black Tomorrow uses more subtle methods of progress. It seems clear that the band is taking full advantage of this style being vocal-centered, with some further pushing of vocal melodies to the front at just the right moments. This is best represented by “Eden,” a gloomy and introspective piece that oozes the bleakness of Antimatter with shiver-inducing and emotive vocal lines as well as a saccharine Katatonia-esque guitar melody to finish it off. A focus on diversifying the music as well leads to more acoustic passages involved in songs like “Poisoned” and “Prison of Thought,” which allows for a somber and enriched atmosphere that pulls in the listener. Not that the band has lost their metal edge, with driving riffs of “Contrition” providing a shot of depressive adrenaline and the dark vibes of “Death and the Master” giving an deadly reminder that ominous riffs and clean vocals always have a seat at the table. Perhaps the finest point of the album, “Dreaming the Inverse,” pools all of these ideas into a single thought, interplaying dreary atmosphere, catchy yet dark melodies, and some soaring vocals into a mixture that’s sure to stick with you long after the album ends.

Some bands get lost in the transition from EP to full-length, but the gentlemen of Deathwhite directly hit the bullseye on For a Black Tomorrow. Memorable riffs that can veer from dark and brooding to melancholic and genuinely emotive couple with strong vocals that bring each feeling to the next level. It shouldn’t be too long before you see Deathwhite mentioned in the same sentence as other depressive heavyweights such as Katatonia, Anathema, and Alcest.