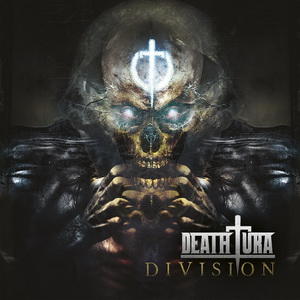 Starting out of friendship in 2011, this Belgian act Deathtura evolved from a music project into a full-fledged band, recording an EP and full-length independently prior to signing with WormHoleDeath for this follow-up Division. Fresh to these ears, the band possess a cross-pollination style that incorporates a mix of groove, thrash, death, and even metalcore that certain embraces numerous influences from the 90’s and 2000’s – ensuring at the very least that a key selling point will be the diversity present. Hoping to mix the yin/yang approach in multiple ways through vocal and musical combinations, these eleven songs showcase the wide scope of textures and feelings that can be conveyed given the right tools, abilities, and musicians on hand.

A sinister guitar tone along with proper groove mechanics from the rhythm section makes opener “Purgatory of Our Future” an early favorite – the music blurring early metalcore (think Killswitch Engage) and aspects of latter-day Trivium because of the multi-level growl/scream/clean vocal switch-ups among the bandmates. Often a Southern-like swagger enters certain melodies against some mid-tempo Metallica-ish rhythms, while the consistently evolving drum parts naturally flow between solid groove and semi-thrash/metalcore mechanics. The catchiness of certain guitar harmonies, albeit brief, make “Help Me Confide” or “In Sight” standouts, the latter especially because of some reflective clean instrumental sections that builds into an emotionally solid lead break that is highly memorable. Bastian Flames as a singer has a chameleon-like approach song to song – diversifying the proceedings into almost a clean/semi-rap stance for the verses of “Escape the Time” with occasional screams/growls when called for, but calm and reflective in his lower delivery for the ballad “Killing Your Threats” that makes this almost Stone Sour-like in appeal.

At times Division has the right sum of all these jigsaw puzzle pieces – and at others seems a tad disconnected and off the map. It could be an out of place blast beat section, or a clear reference point musically to an influence like Pantera (“Broken Man’s Road” for the latter), but Deathtura appear to still be settling in creatively on where exactly they want to go for an overall approach to their music. One to watch down the line, as there are enough winning elements to push forward on the next effort.