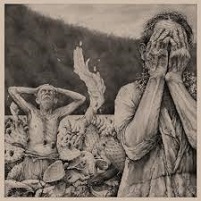 The path to ascension continues for the mystery-cloaked members of Deathspell Omega. The first new material from the band since their stellar 2010 release Paracletus sees an influx of all that made that album such an absorbing piece of work while maintaining growth in new and unexpected ways. Deathspell Omega continue to redefine the definition of black metal to suit their desires here on Drought, taking no prisoners when in high gear and making zero apologies when venturing into the abstract. A very dense piece of work, this EP’s only fault being that as an EP it’s painfully short at a mere 21 minutes.

The notion that something is different is readily apparent in the slow burning nature of opening track “Salowe Vision,” a clean

and almost doomy opening movement repeating while slowly gaining intensity, thematically picking up almost exactly where “Apokatastasis Pantôn” left off at the end of Paracletus. Gears shift dramatically as “Fiery Serpents” takes off, the prevalent ‘chaotic’ sound so prevalent across Deathspell Omega’s last few releases blasting its way into oblivion, the only noticeable change being that the dissonant guitar so pervasive in Paracletus has been scaled back, while still jagged in nature the tone is less abrasive. “Scorpions & Drought” continues this barrage and is arguably the most straight forward track here, blasting back and forth and bounding to several bouts of frenzied breakdowns before abruptly falling to silence.

“Sands,” the EP centerpiece and thematic fulcrum in which the mood of the release shifts is but a short bridge between the effective halves of the album, intense for its use of rather haunting wails that blanket Mikko Aspa’s vocals. “Abrasive Swirling Murk” stars much like the two blast happy tracks but around the halfway point bottoms out completely, taking a turn for the mournful and abstract, the moods evoked by music akin to that of watching yourself be torn apart. EP closer “The Crackled Book of Life,” much like the opener, stands in stylistic disharmony with the hyper-paced middle of the album. A series of buildups and thematic shifts eventually give way to some surprisingly moving (if incredibly subdued) guitar solos that flow over the rest of the song – a full collapse of whatever material world the listener exists within.

Drought showcases a band, no matter how draped in shadow, functioning at the absolute top of their game, the music within the embodiment of desolation – a soundtrack to living alone to see the end of the world. Showcasing pieces of all of their releases since Fas… , notably the melodic tendencies ofParacletus and the absolutely hyper-kinetic force of 2008’s Chaining the Katechon. The trilogy and supplemental material that those releases were a part of have finished and this release exists as a first step in something completely new, an unlimited sea of possibilities stretching out before the band. Focused to the bleeding edge and operating on a level no one else even comes close to, Deathspell Omega stands alone, in the black metal world or otherwise.