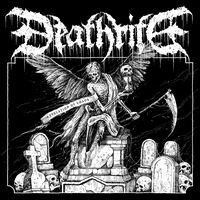 If there’s one thing you can do, here in 2015, to make sure that your band sounds like other bands, it’s using an HM2. The resurgence of old school Swedish death metal has gotten to the point where what was traditionally more of a calling card for some bands has become diluted to the point where it seems more bands are using it than not. Every week there are more bands trying to break their way into the metal scene by being the next Entombed/Dismember. And that’s a bad thing for a band like Deathrite.

Deathrite is getting the benefit of the doubt, based on their performance on Revelation of Chaos. Instead of trying to be Entombed (variation 5,403), Deathrite have managed to take some crust/punk and grindcore elements into their mix to work as a distinction from the rest of the crowd. Does it work? For the most part, yes – but the buzzsaw crunch of the guitars, while they get into a punkish drive on tracks like “Toxic Hammer” and “Wrathbringer,” still have that sound. The crust/punk and grind influences give the tracks a bit more energy and makes them pop a bit (see “Predator”), which helps make up for the sound similarities.

Revelation of Chaos does have a bit more energy and playfulness than other dime-a-dozen bands trying to cash in on the current retro crop but doesn’t quite go the distance to stand out. The band has some songwriting potential, and if they could find a way to keep things dirty on the guitars without resorting to the ‘buzzsaw,’ it might help them to establish more of their own identity. But there is certainly a portion of the death metal crowd that is going to eat this one up, as is.