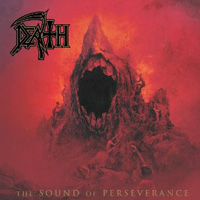 Considering it will be the 10th anniversary of Chuck Schuldiner’s passing this December, it’s quite fitting that Death is getting the reissue treatment. We would be remiss to not convey the band’s importance to death metal, for without Death, there wouldn’t be death metal. Such a statement could be a reach (see: Possessed, early Sodom, etc.), but Schuldiner’s range and influence on all things death-related is immeasurable. The first reissue out of the bunch is fittingly, their last opus in the form of 1998’s The Sound of Perseverance.

With the standard re-mastering job and added demo tracks, this reissue isn’t a vast improvement over the original. And since the original is still somewhat fresh, there isn’t a lot to expand upon. The open drum roll from Richard Christy on “Scavenger of Human Sorrow” still rips, “Bite the Pain” is as crunchy as ever, while eventual classics “Flesh and the Power It Holds,” “A Story To Tell” and the instrumental “Voice of the Soul” emerged as some of Evil Chuck’s best compositions in years. Let us not forget the face-melting cover of “Painkiller,” which saw Schuldiner reach for the rafters with some rather surprising high vocals.

In terms of extras, demos from most of the album’s tracks are included, all with passable quality. Of interesting note is how snappy Christy’s drums sound, as well as Schuldiner’s very 1991-sounding vocals. The man did sound rather black metal-inspired on The Sound…, allowing these demos to provide an alternate glimpse as to how things could have sounded if Schuldiner stuck with the vocal style previously heard on Human and Individual Thought Patterns.

One of the best albums to hit the late 90’s, The Sound of Perseverance essentially is the climax of Schuldiner’s career with Death. One could easily chart the progression from album-to-album, and while this is not the preferred Death album (Individual Thought Patterns remains their best work), it is still very much a progressive death metal hallmark. As it should be.