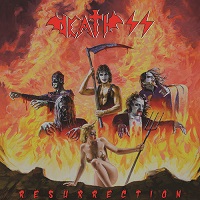 Death SS have a Wikipedia page, which came in handy when trying to plot the course of the very review you’re about to read. Long name-dropped and considered one of those revered cult bands, the Steve Sylvester-led outfit (who is at 34 ex-members and counting, thank you research!) may have failed at creating a breakout album, but their aplomb and thematic horror metal style still has a place…36 years after their inception. Resurrected happens to be the name of their newest effort, titled in reference to seven-year wait between studio albums for the band.

The visual component of the band is like Kiss-on-Rocky Horror with a black metal twist. Or something like that. Our first inclination was to reference Swedish metallers Avatar, who also employ some of the same visual ideas to buffer their presentation, and while the two both fancy industrial tinges in their music, Death SS is definitely the lighter of the pair. The mechanized beats of “Revived” are tolerable, but a tad hokey, while the vaudeville angle of “Star in Sight” is quirky; same for the balladry of “Ogre’s Lullaby.” On the flip-side, the trad-metal banging of “The Devil’s Graar” has some swag, as does “Precognition,” so there’s some teeth to what Death SS is doing.

Quite easy to harp on the band’s 36-year stint in metal, as well as the various make-up and characters they employ, so it can threaten to make the music secondary. Therefore, at face value, Resurrected, for its offbeat nature can lay claim to one thing: it’s different.