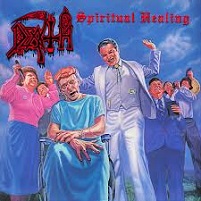 The last of the totally primal Death albums, Spiritual Healing came to find Chuck Schuldiner in a state of transition, still grappling with the bludgeoning sounds of Scream Bloody Gore and Leprosy, while trying to keep up with the technical advancements being made by Morbid Angel and Atheist. Thinking ahead, the jump the band made from Spiritual Healing to Human was unprecedented, making this, the band’s third album a timeless pillar of pure American death metal.

Relapse has done another bang-up job with this reissue, tacking on a second disc to the standard reissue that features 16 previously-unreleased demo songs and rehearsal jams (the Schuldiner vault does appear to be bottomless, doesn’t it?). Hearing the select cuts from Spiritual Healing in instrumental form is pretty cool (especially the title track, which sounds drastically different without lead guitars), making it a fun experience to flip between the finished versions and in-progress works. It does sound like only Schuldiner, bassist Terry Butler and drummer Bill Andrews were taking part in certain songs, as lead guitarist James Murphy probably hadn’t of joined the fold at that point in time.

Spiritual Healing saw expansion in the lead guitar department, aided by Murphy, who would go on to sling the axe in Obituary and Testament. The lead trade-offs on “Living Monstrosity,” “Altering the Future” and “Genetic Reconstruction” were a harbinger for future Death albums, as leads and melodies became more of the focus, not Schuldiner’s basic, but churning riffs. The title track is still the best cut here, with Evil Chuck’s best line of ”Speak no more lies. It’s your turn to die!” Also of note is “Killing Spree,” which opens with a ladder-climbing lead and a d-beat tumble that is inescapable.

Like the previous Death reissues, Spiritual Healing is mandatory. It’s an important piece in the death metal puzzle; one of the first albums that demonstrated a band willing to expand upon its sound. And that album cover? One for the ages.