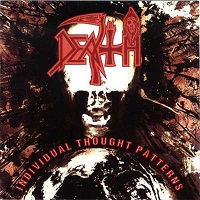 Surely plenty will beg to differ (especially our own Mike Sloan), but 1993’s Individual Thought Patterns is not only Death’s best album, it’s also the best death metal album of 90’s. Big words considering the massively influential albums that came from said decade, yet we’ll back this effort because of its unmatched songwriting acumen, sterling technicality, and spitfire hubris from Chuck Schuldiner. The third album in a line of reissues from Relapse, Individual Thought Patterns could not be more essential, which is what we’ll do our best to explain.

Like the other Relapse reissues, Individual has been remastered, this time by Alan Douches, a man with a wide range of names on his resume including Deicide, Born of Osiris, and Everytime I Die. What Douches primarily did was bolster Gene Hoglan’s drums, a wise move since you know, Hoglan is a beast of a drummer. Now, Hoglan’s drums are more large and snappy, virtually jumping out the speakers when the opening barrage of “Overactive Imagination” hits. It makes a giant difference from the original.

After finding his technical groove with Human, Schuldiner proceeded to write a slithery, melodic, yet no-less brutal album. The punishing groove of “In Human Form” and breathy “Jealously” further pushed Death’s sound to the brink. This is also where melody totally found its way into Schuldiner’s headspace, as evidenced by the intro of “Trapped In A Corner,” the atmospheric chorus of “Mentally Blind” and the acoustic flair of “Destiny.” To cap things off, lead single (and Headbanger’s Ball regular) “The Philosopher” quickly became one of the first real death metal “hits.”

In terms of bonus cuts, a live set from the band’s 1993 European tour is culled, with a wide range of cuts spanning the entire Death catalog up until that point. Live, Schuldiner is remarkably in step with his studio work, as heard on “Suicide Machine” and classic “Zombie Ritual.” Extra kudos to Schuldiner for introducing each song in his regular talking voice, as opposed to the comedic banter of his contemporaries. Chuck was too cool to announce songs like Cookie Monster.

Like we noted above, Individual Thought Patterns is the best Death album, with the best Death lineup (Schuldiner, Andy LaRocque, Steve DiGigorio, Hoglan), and came at a time when death metal was about to over-exhaust itself. To minimize its value would be doing it a tremendous disservice. Utterly brilliant 18 years after its release.