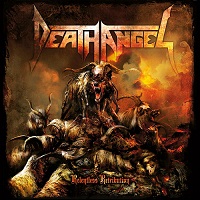 Many have gotten in the habit of stacking all of the old-school, Bay Area thrash bands up against one another, which isn’t all that surprising – it’s probably what happened during the 80’s too. As it stands, Exodus and Testament still reign supreme, but don’t sleep on Death Angel. The third album since their 2001 reformation, Relentless Retribution emerges as the band’s heaviest to date, out-muscling Exodus’s recent Atrocity Exhibition: Exhibit B, and proving there’s still a lot of new ground for the band to explore.

The pairing with in-demand producer Jason Suceof (All That Remains, Trivium) has upped the ante sonically, for sure. Relentless Retribution brims and bristles with a sound the band has never had, thus thrusting rather hard-edged and brutal numbers like “This Hate” (love the opening riff) and lead single “River of Rapture” to the forefront. Melody is also used when it’s needed – just check out the memorable “Opponents At Side,” a gliding jam which features a nice duet between singer Mark Osegueda and guitarist Rob Cavestany.

A certain degree of songwriting aptitude remains very much at the top of DA’s qualities, as evidenced by the finely-tuned choruses of “Death of the Meek,” and the thrashy “I Chose the Sky.” Even popular Latin guitar duo Rodrido y Gabriela get into the mix for the tail-end portion of “Claws In So Deep,” for a surprising acoustic outro that adds more zest to the proceedings.

Perhaps buoyed by the addition of an all-new rhythm section (Damien Sissom and Will Carroll came aboard the ship last year), Death Angel sounds every bit as vibrant as they did during their Frolic Through the Park days. Relentless Retribution is the best out of the post-reformation era of the band, and with a headline tour planned, it’s quite possible Death Angel could pass Exodus and Testament.