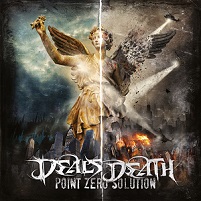 Just when you thought it was safe to write off Deals Death as Sweden’s resident Children of Bodom doppelgänger, Point Zero Solution drops and radically alters that perception. Showing much more stylistic diversity than previous efforts and delivering liberal quantities of bombast and menace, this particular outing is a huge leap forward in the quintet’s evolution.

In crafting the record’s eleven tracks, the band has culled various influences from across the metal spectrum. The mid-tempo “The Separation” echoes the Bodom-esque brand of melodic death metal this outfit is known for, while rippers like “Flatline” and “Paramount Authority” delve into pure thrash brutality untapped in the group’s back catalogue; the latter track’s verse riff, in particular, could easily find its home on an Exodus record without sounding the least bit out of place. As if foraying into thrash isn’t enough of a departure, the keyboard flourishes that permeated previous records are mostly gone, replaced by full orchestral arrangements that harken Dimmu Borgir and Cradle of Filth at their most symphonic, as evidenced in the grandiose title track and the haunting chorus of “Back to Consciousness.”

Worth particular note are guitarist and principal songwriter Erik Jacobsson and frontman Olle Ekman. Jacobsson’s soloing is every bit as diverse as the song structures themselves, covering everything from John Petrucci-ish  melodies in “Facing the Echoes” to Slayer-style tapping and whammy abuse in “Beyond Reason.” Additionally, Ekman has redefined his vocal approach. Without losing any intensity, he vocalizes in a lower register than previously, replacing the Alexi Laiho screech of yore with a menacing snarl that invokes Dimmu Borgir’s Shagrath at his most ferocious.

Aside from back-to-back mid-tempo pieces disrupting the flow of the record about halfway through, and some songs bordering on sounding overproduced, this record is a powerful entry for Deals Death. And if it is any indication of the risks the band is willing to take and the progress they are capable of in a short amount of time, they will be a band to watch closely in the future.