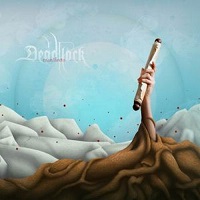 In theory, an album like Manifesto belongs in the garbage can. It’s over-polished, uniformly produced, and blatantly formulaic. Purveying the brand of modern melodic death metal that Scar Symmetry and Sonic Syndicate have now popularized, Deadlock have somehow managed to turn lemons into lemonade, or for that matter, create an album that has surprisingly ample weight.

The two-headed vocal attack of Sabine Weniger (she does clean) and Johannes Perm (he does dirty) is hardly new, yet Weniger’s seismic, poppy vocal hooks in the choruses of “Martyr to Science,” “The Brave

/Agony Applause” and “Seal Slayer” are just too much to resist. Granted, these are the type of selections one can quickly tire on (we’re getting there…), yet Weniger adds a unique dimension to an otherwise stale format of metal.

Utilizing the services of Jacob Hansen (Mercenary, Heaven Shall Burn, etc.) unfortunately makes Manifesto sound like…every other album coming from Hansen. Guitars bristle and shine with plenty of pop, especially on “Slaughter’s Palace,” but it rings too familiar.

Some questionable moves on Manifesto include the opening techno segment “The Moribund Choir vs. the Trumpets of Armageddon” and a rap

outro on “Deathrace.” Sticklers like yours truly aren’t exactly forgiving of this sort of thing, yet the scene kids will no doubt hail this as something momentous.

Deadlock are from the best band on Lifeforce (that distinction would belong to Nightrage), but they offer an alternative to the mediocre melodic metalcore horde that consists of most of the label’s roster. One might be taken aback at how sticky-sweet Weniger’s choruses are, but a good hook is like a hot chick – you don’t pass ‘em up.