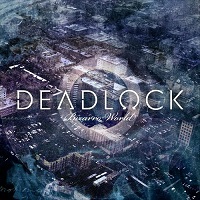 Often derided for their use of syrupy female vocals in the context of rather stock melodic metalcore, Germany’s Deadlock appears to have totally figured things out with their fifth album, Bizarro World. Make no bones about it – the band is an acquired taste, especially when Sabine Weniger’s poppy clean vocals are dropped in, yet Deadlock has managed to pull together at least a half-dozen memorable songs here, something that couldn’t be said for their previous output, most notably 2008’s inconsistent Manifesto.

The bulk of the 11 songs here run a similar pattern, which is the use of Johannes Prem’s gruff vocals for the verse, and Weniger’s female vocals for the chorus. Obviously, this template has been beaten to death, although the Germans have some winners on their hands, especially opener “Virus Jones” and “Falling Skywards.” Weniger is primary benefactor here, as her moments in the chorus are about as stickly-sweet and hummable as anything ever heard in melodic death metal. Her growth as a vocalist is even more evident on album highlight “State of Decay,” which would be the obvious choice for a lead single, as it’s just her on the entire song.

Lots of riff and melodic ideas stem from the big tree of German melodic metalcore (Heaven Shall Burn, Maroon, Caliban, et al), although the gentle keyboards on the radio-oriented “You Left Me Dead” displays a rash of versatility said bands probably wouldn’t pursue. The band still has this weird and unnecessary interest in techno music, something that comes back to bite them on “Renegade,” which would be a solid song if it weren’t for the techno bits in the chorus. Metal and techno don’t mix, kids.

Because of the added bonus of Weniger, Deadlock appear to be poised to avoid the trappings of their German metalcore contemporaries. There’s just a much wider spread in which the band can operate from, and Bizarro World is a bold move from a band not afraid to take chances. Plus, Weniger is easy on the eyes. Yet another bonus.