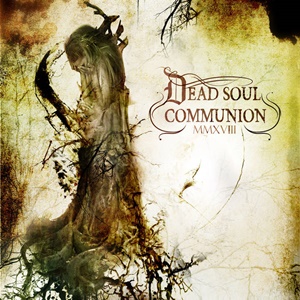 Ambitious and cognizant of the finish line (the final album already announced for a mid-2020 release on their website), UK act Dead Soul Communion steadily plan to unleash recordings multiple times a year. Featuring members and ex-members of Steve Harris’ British Lion, Dearly Beheaded, and Synaptik among others, the band issue their latest full-length MMXVIII after two years of writing and recording. These musicians develop a style that has multiple facets, while being groove metal at its core there are aspects of gothic, industrial, and progressive rock/metal intertwining to ensure versatility song to song.

A precise mechanized-like presence penetrates much of Dead Soul Communion on the musical front – songs like “Conspiracy of Reason” and “World Beneath” using keyboard/guitar combinations that along with a pocket drumming punch make you think of Fear Factory taken into a 90’s gothic metal veneer. Main vocalist Edwin Mascorn (along with supplementary work by guitarist/keyboardist Daniel Finch and keyboardist/acoustic guitarist Paul Jensen) conveys his melodies in varied twists, employing distance and despair along with anguish and pain from clean and screaming templates. Often when the guitars push the rhythmic angle, it works to establish a seductive/hypnotic groove- especially as the keyboards supplement the proceedings in an orchestral/soundtrack fashion for personal favorite “Strengthen These Walls”. The combination of sounds sprouts interesting juxtapositions – where progressive passages sit against straightforward tempos with that industrial flair, or alternative/gothic melodies penetrate as the circular guitar crunch fluctuates from metal to rock and back again.

There are a couple of misfires where the band chooses to drive home a hook a bit too long (“Eradicate to Communicate”) and the final song “Burn” at almost ten minutes goes through this prolonged, ambient sequence during the final four minutes where the low keyboard wash just sits in stagnation. As a whole, MMXVIII serves its purpose for an aggressive gothic/groove metal effort that dips itself into industrial/progressive arenas without overstepping boundaries – not an easy feat.