Dead in the Dirt – The Blind Hole (Southern Lord) 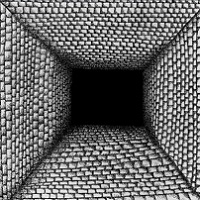 Anyone who has spent any amount of time in a band rehearsal room knows that feedback is quite possibly one of the most annoying things ever. Next to playing one’s instrument while another band member is trying to explain something, a steady diet of feedback is grounds to have your amp turned off, your Metal Zone pedal tossed in the trash, and a stern talking to in order to showcase male dominance. Clearly, no one cares about such things in Dead in the Dirt; The Blind Hole is riddled with uncontrollable feedback.

A trio hailing from Atlanta, Dead in the Dirt are a crusty, noisy, d-beat punk crust band (see previous gripes about most of Southern Lord’s roster). With little to show for themselves in terms of song structure, hooks, and fresh ideas, the random pops of guitar feedback that come in on cuts such as “Suffer” and “Will is the War” are really the only things worth picking out. Some bands use this tool as means to stretch out their songs – Dead in the Dirt are doing it because in all likelihood, they’re standing too close to their amps. Plus, having a clean, proper sounding guitar tone would be lame, right?

It’s rather difficult to endorse an album with a 22-song running order that clocks in at 23 minutes. The Blind Hole is akin to a nascent grind band’s first practice: Out of sorts, incoherent, and ultimately, unlistenable.