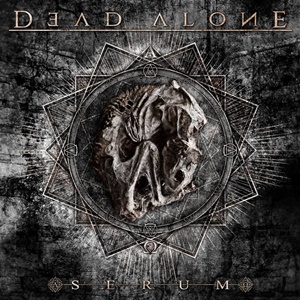 Taking listeners on a journey down to the deepest abysses of the human soul, Dead Alone straddle a dark death meets doom metal stance that possesses groove on their fifth album Serum. Releasing two previous albums independently before joining the Supreme Chaos roster, they are now a part of the upstart Reaper Entertainment label. Only vocalist/bassist Florian Hefft remains since their 2004 inception, but the quartet still appear resolute in a potent display of finesse and extreme riffing, chaos, and execution – while remaining musical and coherent, a combination that finds these eleven tracks quite endearing.

Often what intrigues this scribe about bands that willingly spread their creative wings and crossover multiple genres is the grey shades that can be explored for ideas. Take for instance the instrumental “Fear” – a 3:47 effort that goes from gothic/The Gathering-ish circular guitar layers or softer keyboard underpinnings into blackened/blast tempos in a nanosecond, keeping the seemingly disparate themes cohesive. Between Fred Freundorfer and Michael Grabow as guitarists, they fill the landscape through layering and point/counterpoint parts, rearing back for melodic death fury during “Swarm” while exploring epic terrain and resplendent, call to arms marches at mid-tempo a la Primordial for the 6:19 “Four Prophets”. The pacing of the album also seems intriguing – choosing to end the record with the three longest arrangements, but each of these six to seven-minute tracks explore different doom/dark metal combinations – Florian’s savage blood curdling screams a feature of “The Serum”, while closer “Faith” embraces lower funeral keyboard segments and tribal, tremolo-fueled action to give the listener a fitting, cerebral conclusion to the record.

The tones and production values resonate with what one would expect out of Dead Alone in a live situation – the textures allowing the listener to feel the crevices, the beauty juxtaposed against the aggression and unbridled energy that shifts song to song. Serum reminds me of early Paradise Lost, Septicflesh, as well as the already mentioned Primordial/The Gathering combinations – a killer musical cocktail that proves extreme metal still has vitality and depth this deep into the game.