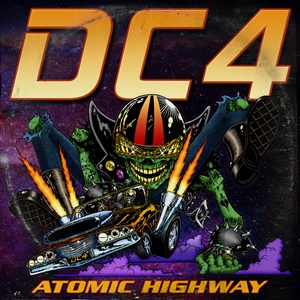 Consisting of three brothers (including Armored Saint axe man Jeff Duncan) plus ex-Dio guitarist Rowan Robertson, DC4 on their fifth album Atomic Highway keep a back to basics bluesy hard rock template for these ten tracks. It’s always nice to dig deep into those early influences that helped shape your playing and outlook on music, bringing it back to the people from a place of integrity and passion – and that’s what you’ll hear throughout. Leaving the production/recording duties in the capable hands of Bill Metoyer, it’s nice to dig into this in your face record that encompasses all facets of UK and US hard rock from the 70’s to late 80’s when looking for reference points.

Rowan and Jeff showcase a flurry of blues-laced licks and speedy lead break action with tastefulness at the core of their playing – it’s hard not to get ramped up by the energy of the title track and the mysterious swing shuffle throughout “Castaway”. The rhythm section contains that John Bonham-ish open snare sound and solid bass ethics to drive home the groove. Later in the record DC4 transforms the Who classic “Baba O’Riley” to make it special, the circular opening segment heavier, while also including a guest vocal appearance from John Bush to supplement Jeff’s voice, and Dizzy Reed adding his piano skills for the final piece to tie things all together. The record runs the gamut from balls out efforts like “Something in My Head” to an elegant, semi-acoustic ballad like “21st Century Love” that recalls psychedelic The Beatles against UFO or Aerosmith – ensuring little ear fatigue over too much sameness in the songwriting department. You even gain insight into the childhood scenery and experiences of the Duncan family when taking in the lyrics for “Queen of Angels” – selling their soul for rock and roll.

Atomic Highway is the type of record that helps bar sales, brings out the old-timers, and allows people to release that work week tension in a healthy, safe way. It’s more melodic hard rock than metal – but sometimes we need that diversion when it’s done as well as it is here.