Days of Anger – Rise Above it All (Coroner Records) 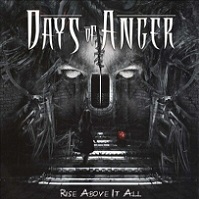 Weird…if an American band attempted the brand of no-frills/meathead/”attitude” metal that Days of Anger lay out, then DR would probably be having another hissy fit over how dated and unintelligent this stuff is. Well, it is a bit unintelligent – the band is called Days of Anger after all, but it sure beats being called Days of the New. (Bonus points if you remember those acoustic grunge hacks.) But back to the point at hand: Days of Anger are Swedish, so they don’t automatically get a free pass, they just make it more presentable.

Rise Above it All is the band’s sophomore album, the follow-up to 2011’s Death Path, which came and went without much notice. One could see why – Days of Anger play a largely Americanized brand of aggro metal, devoid of melody, but top-heavy on grooves and the petulant shouts of Alex Jonsson. The bulk of the album treads muscle-bound paths, meaning that cuts like “A Case of Insanity” and “Bow Your Head Down” engage in group-shouts and simplistic, yet jarring riff action, while it’s clear Black Label Society posters adorn the band’s practice space based on “Night of the Damned.” Jonsson is no Zakk Wylde…maybe that’s a good thing. We don’t need any more people like him.

A rare Swedish band that falls into the margins, Days of Anger are tailored-made for American metal times of yore, ala 1993 to 1996, when Pantera and Machine Head were dominating (I hope you got that), and the groove and being tough were cool. Days of Anger are tough and can groove, yes. What that means in today’s landscape is hard to figure…