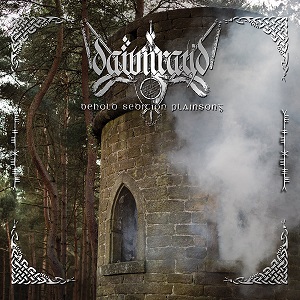 Liverpool’s Dawn Ray’d come with a message and it’s an easy one to grapple with: Down with tyrants, oppressors and holier-than-thou types who try to keep the working man down. It was the signpost of their totally excellent 2017 The Unlawful Assembly debut, a blistering concoction of feral black metal, melancholy and sweeping violins, the band’s undisputed ace in the hole. Yet for all the palpable rage Dawn Ray’d concocted, you had the feeling on The Unlawful Assembly they were just moving into action, hence, the just-as-teaming Behind Sedition Plainsong.

The atmospheric elements that so adorned The Unlawful Assembly are mostly cast aside for a more straight-ahead push (think a grouping of the second wave of black metal with a U.K. twist). In turn, Dawn Ray’d is largely going for it, with the throat-scraping roar of Simon B. leading the charge. He’s boosted high in the mix, probably a bit higher than some of his contemporaries but when he’s in full throat, it’s like he’s leading an angry mob of disgruntled townspeople without a megaphone, if you catch our drift.

The violin is used mainly as a folk offset. It’s quite the adornment at times, especially when it pops up during “To All To All To All!” and the closing “The Curse the Dappled Light,” which saves the album’s most crestfallen moment for last. In between, however, Dawn Ray’d pile on an assortment of aggressive tremolo runs and hazy chords that pair up with the punishing blasts of drummer Matthew B.

Music that appropriately reflects our troubled, dark times, Dawn Ray’d are now rightfully at the forefront of the U.K. black metal scene. At this time, no band sounds as intense, purposeful and honest as Dawn Ray’d. The warning shots have been fired.