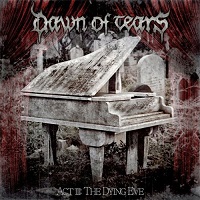 Cited – and rightfully so – as a knock off the ‘ole Gothenburg block, Spain’s Dawn of Tears serve as a reminder that the cherished sounds of early At the Gates, Dark Tranquillity, and In Flames are still very much in play. So by hunkering down with early 90’s Gothenburg melo-death, cast out are the immediate, near-commercial song structures each of those bands employed once they hit their prime in lieu of long, spaced-out structures, the kind that don’t have much of a median, but don’t back out on melodies, a frequent occurrence on the band’s redeemable Act III: The Dying Eve.

As it so happens, keyboards enter the fray, not necessarily as a primary sonic chucker, but there to embellish the melody rounds, which makes a tune like “Present of Guilt” work; same for “The 7th Seal.” Because there’s such a bevy of dainty guitar lines being tossed about, one doesn’t have to try hard to grasp the Skydancer handle of “The Darkest Secret” or “Angel Gone,” which doesn’t quite have the same ring as At the Gates’ “Kingdom Gone,” but the effort is commendable.

For bands that still cling to the vestiges of classic Gothenburg, the ever-present risk of sounding dated, not with the times, and plagiaristic usually come into play. Dawn of Tears, though, make due with what limited scope they have to work with, thus rendering an album like Act III: The Dying Eve worthy of a trip down memory lane, where even a new idea or two might be stumbled upon.