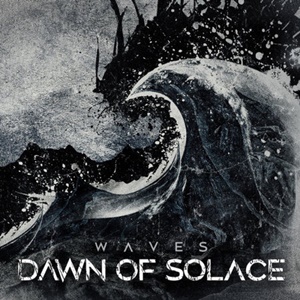 14 years after the debut Dawn of Solace album The Darkness, released on the now defunct Dead Air label, main writer/instrumentalist Tuomas Saukkonen (Wolfheart) resurrects the band for a second full-length for Waves. Those unfamiliar with the style of this act should know it’s a great mixture of melodic doom, gothic metal, and a pinch of death in there as far as atmosphere and textures – capturing an ambiance of purity, emotional engagement, and serenity along with heaviness as the all encompassing aspects move your heart, your mind, and your soul.

The work of Tuomas on every aspect instrumentally is nothing short of brilliant – he knows how to phrase the guitars, bass, drums, and keyboards in such lush and compact ways, building things out in robust fashion of dynamic intensity. It’s very hard not to get swept up in the musical hooks and tenderness of “Tuli” or “Silence” upon first exposure, and then look at the subtle nuances through further listens, the latter containing interesting back and forth clean guitar picking against a circular piano refrain before kicking into mid-tempo, Paradise Lost-like terrain. The Finnish melancholic nature of the guitars/lead melodies during “Lead Wings” sets the album’s tone – the feeling of hope against despair, with vocal parts from Mikko Heikkilä conveying that same ethereal, alternative morose posture with a glimmer of light. At a period where Idle Hands for instance are gaining modest acclaim for their alternative/gothic textures, people need to look at Dawn of Solace as being one of the frontrunners for this so long ago – as it’s hard not to get swept up by the circular themes and rising/ascending melodic doom/death/gothic chord progressions and atmosphere that put “Numb” and “Ghost” into spine-tingling territory – the lyrical scope equally inviting in it’s haunting, poetic charm.

Eight songs and forty minutes of moving material, Waves will hopefully inspire Tuomas to continue his multiple-band exploration that had been capped for most of the 2010’s during Wolfheart’s infancy and subsequent growth. Certain musicians just have so many shapes and ideas that pour out of them, and we would be remiss not to enjoy this aspect to his vast musical knowledge, experience, and output.