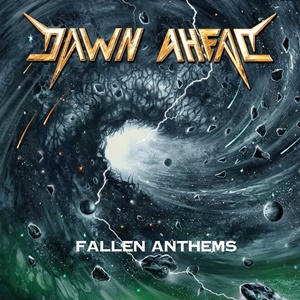 Coming together between 2012 to 2014, German quintet Dawn Ahead have self-released two EP’s in a self-titled effort (2014) and A Trip of Violence (2018) – leading to some member shifts and signing with Art Gates Records for their debut full-length Fallen Anthems. Taking a thrash metal base and exploring elements of straightforward heaviness and modern death/extreme nuances, it’s a diverse approach on both the vocal and musical fronts that after a few spins appears to have hit or miss results at this point in time for the group.

Often you’ll get tempos that can maintain a groove one segment and then explore off-time/progressive terrain at different speeds, the guitarists up to the challenge to also switch up the feel from frantic picking into half-time measures that possess a bit of staccato/crossover texture. Drummer Jan Bechtloff has a penchant for the semi-snare blast of death/thrash proportions that switches into a slamming groove-based backbeat instantly, “Suffer” an early example of his adept skill set. The modern crunch a la Lamb of God or Trivium comes into focus for the opening riffs for “I Command”, before the maniacal raspy screams and growls of vocalist Christian ‘Chrischaan’ Wilsberg take ahold – a chameleon channeling everything from Mille of Kreator to a semi-intelligible death growl, although his clean melodies veer into a whiny/emo-child mix that weakens his impact in spots. You can expect solid lead breaks and equally catchy instrumental sections sure to raise fists, bang heads, and move audiences when live shows come back around. Militant march aspects a la Jungle Rot or 90’s Metallica make “Among the Blind” another interesting track, the drumming jumpy at first in a Life of Agony way before the semi-rhythmic vocalization rambles along against the mid-tempo riffs and foundation. The occasional progressive bass aspects and classical-touches do wonders that Dawn Ahead should explore and expand upon more in future outings – “Shot at Dawn” in its minute plus opening sequence very intriguing before the heavier, heads down thrash takes over. The band vary their arrangements in short to longer constructs – “Summon the Black” at almost ten-minutes featuring a light jazz/atmospheric instrumental sequence where bassist Patrick Samarzija gains a solid bass spotlight before an extreme blackened switch kicks into gear.

Dawn Ahead seems like a group that wants to put all these varied elements into their modern thrash style, but really need to think about what works and what doesn’t. This scribe believes reigning in a bit of the clean/whiny melodies and sticking to the heavier vocals would be a start – so let’s see where the next recording takes the band.