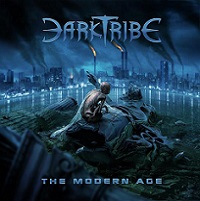 At this point, a fresh, relatively new melodic metal band has to be really good to make an impact. Or, they need some kind of shtick ala Powerwolf (vampires) or Sabaton (Swedish army dudes). If not, then, well, it’s over to blank-stare bin, probably forgotten in a year’s time, or less. France’s Darktribe hang in such a balance, not because the execution is off on The Modern Age (these fine lads can play and sing), but the tedium of rulebook melodic metal may forever prevent these guys from being nothing more than a lower-to-mid level band. It’s just an unfortunate circumstance of the times.

Fronted by the very capable Anthony Agnello, Darktribe’s approach focuses largely on his stretchy, sky-high vocals. Agnello certainly gives it all he has, whether it’s on the soaring chorus for “My Last Odyssey,” the drama-filled “Wildcall,” and the Stratovarius-inspired “Rainwar,” a song where you could almost see Timo Kotipelto (and obvious influence on Agnello) holding down the mic. By and large, Agnello is without the irksome enunciation problems some of his fellow European singers have. He’s actually pretty convincing in a few of these songs, in particular, album closer “Darkside of Imagination.”

Over here in the fickle, unflinching States, Darktribe are going to be viewed as run-of-the-mill. Over there in the more understanding Europe, the band could have a chance at making a name for themselves in the melodic/power metal fracas. With The Modern Age, the Frenchman put on a sturdy, somewhat admirable performance, one that shouldn’t be viewed as rote (as it might be), but rather, another sign that melodic metal can sustain itself in continental Europe.