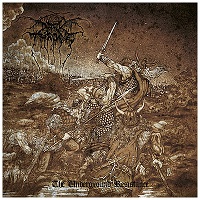 Every time ‘ole Fenriz does press for a new Darkthrone album, he speaks to how the band is in a perpetual state of going backward. By “backward,” Glyve means he, along with Nocturno Culto have no interest in anything beyond the mid-80’s, or any arbitrary period they choose. Hey, that’s fine – at least the pair have the guts to admit they’re not trying to be progressive or forward-thinking. So with that comes The Underground Resistance, which emerges as the band’s most satisfying romp since those unheralded late 90’s/early 00’s reclamation days.

Since the band no longer sees through much of a black metal lens, the parallel to early, unheralded thrash mongers like Razor and Tank, along with NWOBHM are the best guides to what Darkthrone are doing nowadays. It’s evident as the droplets of melody come falling to the ground on “Valkyrie,” which sees some rather harmonious singing from the drummer. It’s the type of move the duo would never dare to attempt during their face-caked-with-paint days; now it’s pure gold. That, along with the rattling “Lesser Men” and “Leave No Cross Unturned” serve as the album’s high points, especially the latter, a near-14-minute adventure that is decidedly old-school in every manner.

Not like there’s any expectations placed upon Darkthrone, but given their pedigree and voice in the scene, they best be delivering. They do on The Underground Resistance, a full-bodied, vintage-for-vintage’s sake romp that proves that Fenriz and Nocturno Culto still have a very firm leg in which to stand on.