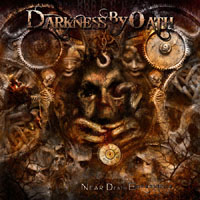 What is that old saying? That you can judge a person by the company they keep, right? Therefore, it doesn’t take a rocket surgeon to deduce that Darkness By Oath is a melodic death metal band. Just look at the guest spots: The Haunted‘s Anders Bjorler, Nightrage’s Marios Illpolous, and a mix job by the now very-ubiquitous Dan Swano (Edge of Sanity, Bloodbath). This trio can probably shoot out a melodic death metal album while comatose; so hey, how about an all-star side project?

The good company that Darkness By Oath finds themselves in translates into a workmanlike, yet highly effective melo-death outing. By adhering to the principal characteristics of melody-infused melodic death metal, DBO is able to breeze through Near Death Experience’s 11 songs without having to break much of a creative sweat. We say that because they’re one major amalgam of prime At the Gates, early In Flames, early Dark Tranquility, and early Arch Enemy, and the results on breakneck songs like “Violent Intentions” and “Steams of Blood” are hard to deny.

Since Bjorler and Illpolous are known more for their soloing than riff prowess, one wouldn’t even know that Bjorler drops in a solo on “Unequivocal Evil Excitement” and Illpolous lends a lead to “Terror In Thousand Faces.” Their talents might have been better served in the creatively-titled “Instrumental,” which is exactly that – an instrumental that is a sea-faring Maiden melody journey that serves as the album’s high point.

There’s little to derive from Near Death Experience outside of the fact that it’s another well-executed melodic death metal album. As we’ve stated at least 50 times (probably more) or so on this site, it’s really, really hard to screw up melodic death metal, and Darkness By Oath didn’t do anything of that nature. They just surrounded themselves with some major players, that’s all. Smart move.