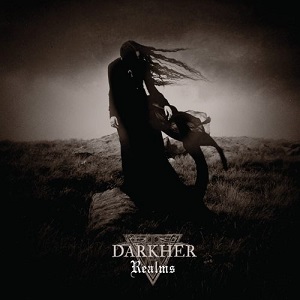 Is it a reach to suggest Myrkur, Sylvaine, and Darkher team up for a show? All three are leading the charge in isolated one-woman bands, each having their own distinct identity, certainly prone to the unfortunate levels of scrutiny that come about when you’re trying to make it in a male-dominated scene. (Seriously, who gives a toss?) Darkher (who is the product of one Jayn H. Wissenberg), unlike the other two, does far more tip-toeing around metal, with Realms working in just a few heavier numbers.

The first band that comes to mind is Portishead, and it’s not a terrible idea to suggest Wissenberg occasionally sounds like Beth Gibbons, especially during her more emotive moments. Relying on the use of space, dynamics, and sparseness, Darkher, by virtue, is naturally haunting. Lead jam “Hollow Veil” is perhaps the best example of this, with Wissenberg letting loose some otherworldly howls, recalling the sorely-missed Ava Inferi. She’s backed by her husbanded Martin, and ex-My Dying Bride drummer Shaun Steels, who usually can be found building (and extracting) tension with his thoughtful tom work. Yet, it’s the textured, constantly building “Foregone” or the solemn “The Dawn Brings a Savior” that ultimately cements Realm’s position as one of the year’s most barren, yet enthralling albums, the practical antithesis to the pomp/no substance world of female-fronted Goth metal.

Perhaps our only qualm is the album’s release date. Realms should have been released in the cold, dank, unforgiving months of winter, where seclusion and introspection rule the day. (That’s us being poetic.) Yet even in the throes of a scorching hot summer, the unforgiving darkness of Realms easily overpowers the sun and everything else in its path.